Breakfast: Granola, cranberry juice
Morning Snack: Donut holes. Aren’t pro hardware stores great?!
Lunch: A great selection of food at a 7 year old birthday party. There were some little meat pies with some Brazillian name, skewers of meat, fabulous guacamole. I should hang out in the park more often.
Afternoon snack: brownies.
Dinner: Went to The Cooperage in Lafayette. Split a brussels sprout and bacon salad (there was a poached egg involved, but not in my half of the split). Then, because they brought the kids margaritas instead of lemonade (without booze, but makes a funnier story to ignore that detail), they brought out a plate of their skillet Mac&Cheese. Seriously, I might head over there just to eat this dish on a cold night; it was in the running for the best Mac&Cheese ever. For our entre, we split the prime rib.
Dessert: We had a selection, including an individual s’mores skillet, a selection of doughnuts, and selection of ice cream sandwiches. The best was probably the chocolate cookie-coffee ice cream sandwich, though the s’mores skillet was fabulous as well.

All in all, a great meal. Last time I ate there, I had the burger, which was fine, but didn’t really differentiate the food. This meal was pretty impressive.

Breakfast: Donuts from Happy Donuts. Not the one on San Pablo near Gilman, but the one on Gilman near San Pablo. Just in case there is any confusion. This one is way better. Of all the donut shops in this part of town, it has the darkest chocolate icing. Nice folks, too.
Lunch: Leftover Mac&Cheese
Afternoon snack: Straciatella gelato from Caravaggio in Berkeley 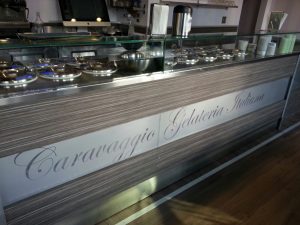 Dinner: Ribs and potato salad at friend’s house. Delicious!
Dessert: Next iteration of the banana blondies with panuche frosting. This time with chocolate bars inside.

Breakfast: Doughnuts from Toot Sweet. First time here for doughnuts (though I think I’ve had cake from here). I would probably rate them as mediocre. They were out of the custard filled by 9:00. The saving grace, though, was the buttermilk doughnut with chocolate glaze. This was just a different take on the genre, and I loved it. Suzanne described it like a biscuit, deep fried and covered with chocolate.

Breakfast (I): Grapenuts with cranberry juice.

Breakfast (II): A cold doughnut from Doughnut Dolly. I don’t really know how this happened, I just walked into work and said “Here” and handed me a soft little white bag. Normally, of course, leftover doughnuts are just lame, but Doughnut Dolly are such great pastries that they don’t turn into a rigid mess after a day.

Afternoon snack:  Just a couple of Hershy’s kisses. And maybe a York or two. Coke Zero.

Dinner:   A delicious spaghetti bolognaise that Suzanne invented. Really sweet with lots of carrots along with the beef and sausage.

Dessert:  Leftover homemade vanilla ice cream. With some hot fudge. Um… after the kids went to bed because there really wasn’t enough for more than two servings. I feel slightly guilty about this.