Lunch: Molcajete (1734 Webster st. Oakland, CA). Great Mexican food. Much more than a quick burrito, this was quite impressively flavorful. That sort of deep flavor where several chews into a bit you realize there is the hint of another spice you didn’t notice earlier. The burrito was small, but incredible.  I was a bit surprised how full I got, actually…

Afternoon snack: Dulce de Leche cake, thanks to Eve. This was one of those delectable bombs that, combined with a burrito, made me mighty sleepy. 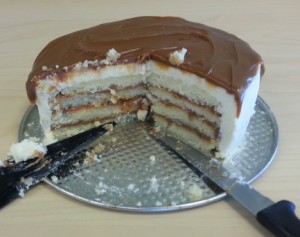 Lunch: Rubio’s. We had a mess in the kitchen already and had to go to the store. Not the best burrito in the world, but fills one up.

Dessert: Hand churned buttermilk strawberry ice cream. The recipe was from Jeni’s Splendid Ice Creams. Honestly, I was undewhelmed. The recipe called for a certain amount of berries, but then, it turns out, you weren’t supposed to add them all to the ingredients, they were just there to make the pan full while roasting. I have a lot of different sized pans, so that seemed weird. Soldiering on, I just dumped them all into the ice cream. True, it did harden up a lot, which is probably what she was trying to avoid. It still didn’t have a very intense strawberry flavor. I’d never make a buttermilk ice cream again, either; it does, indeed, give it an interesting flavor. In fact, it tastes a lot like Fro-yo. Which sort of tastes like not-as good as ice cream.

Breakfast: Donut (from All Star Donuts). Also a Jamba juice because Tessa had a gift certificate she got from bike-to-school day. In which honor we rode our bikes there.

Afternoon snack: A little hummus on bread. Donut still present and accounted for.

Dessert: Apple pie that Eliza made all by herself.

Breakfast: Waffles. Eliza made them.

Dinner: We picked up a flank steak at Costco. Sometimes, those tasters clue you in to something good!

Dessert: Chocolate chip cookies. The girls asked at just the right time and we decided to whip up a batch. Followed the King Arthur Flour recipe, which is my new favorite.

Dinner: Pho from some place in Berkeley that our friends brought to the park.

Dinner:  Burrito from a taco truck at my kids’ back to school night.  Genius idea to have food trucks show up to feed busy families.

Lunch: Roast turkey sandwich with cranberry sauce from the Fat Cat Cafe. Awesome find! It reminds me of this lunch counter called Karlen’s Deli that used to be in the liquor store near my lab. Fresh roast turkey, soft roll, nice proprietor. I’ll be back.